English
Deutsch
English
Long ago, Zak McKracken was a usual hack-writer for the National Inquisitor but after his last story he not only became bestseller-author, heart-throb and editor-in-chief of his own local rag - he also became the world's savior.

After some former Mars-inhabitants, the Skolarians, sent him messages through dreams he saved mankind from being stupidified by the evil Caponians. So now you would think that Zak went down as a hero and now is not only a rich but also a notable man - You wish! - His time in the limelight did not last very long, thats why he is not a bestseller-author nor a heart-throb anymore.

The only thing left is his baby, the National Infiltrator, Zak's own newspaper... but the sales figures hit rock bottom. Although Zak would love to write some more books, he can't get off his job as a reporter. Everything is a new story to him and he ends up writing about this worlds oddities. 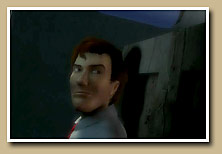 July 27th 2009, 11.45pm - direct flight Memphis - Zurich :
Bleary-eyed and unshaved. Zak McKracken is on board of a Russian airplane. It's freezing cold. Zak is covered in an old dusty blanket taking one last zip of coffe from his thermos. Suddenly the airplane is shaking and the engines are dying out. The plane seems to be standing still in mid-air. While taking a look outside the window Zak can only see a shadow approaching from behind when suddenly being hit on the head... 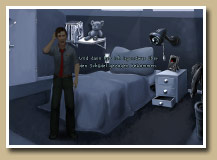 July 28th 2009, 7.30am - 13th Avenue, San Francisco :
The hammering sound of his alarm clock wakes up Zak. He can only vaguely remember what happend last night. Nothing reminds him of yesterdays trip, but he can still feel the bump on his head. Zak can't remember what he did in that airplane, neither can he remember where he was heading...