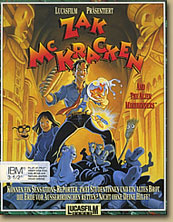 Zak McKracken is a classic adventure game released in 1988 by point and click pioneers Lucasfilm Games (later Lucas Arts). Though very humourous, the game has more to offer than funny lines. It's based on several myths and secrets from all across the globe (and space).

You take control of "Zachary McKracken", reporter by trade, working for a newspaper in San Francisco. Well, sleazy tabloid would be the better words to describe his employer, and to make things worse Zak is having a nightmare of the strange kind.

He is dreaming of aliens, an ancient map of earth, a strange machine-like device and a beautiful woman, who he happens to see on TV the next morning, and who he will meet in the course of his adventure. It soon turns out that Zak and his new found friends are the only ones who can save the world from an imminent alien invasion.

The plot of the game skilfully uses several unsolved mysteries of popular science. While the core of the story builds on preastronautics, it also revolves around the extinct culture of the Incas, the mysteries of the pyramids and the Sphinx in Egypt, the unknown use of Stonehenge, the mystery of the Bermuda-triangle, El Astronauto, the myth of Atlantis and the alleged face on Mars.

Due to these many influences the player gets to travel to many places across the globe and even gets to visit Mars. Besides these mystery elements the game also shines with great written dialouges, smart jokes and the absurd behaviour of the alien intruders.